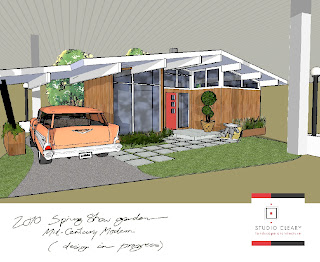 All you garden buffs mark block out time this coming week to visit the Southern Spring Show in Charlotte, NC.  This year is the 50th Anniversary of the huge rite of Spring event and Local landscape architect, Ted Cleary of Studio Cleary is building an Eichler-inspired house in honor of the event and the Zimmerman's who have organized the even for as many years.
Ted Cleary said  "I thought it'd be fun to celebrate that,  and them with a Mid-Century Modern Theme"  The Eichler facade is the center-piece of his exhibit with the front yard being true to it's 1960's roots (pun intented!).  As you move to the back yard you are transported into a contemporary take on the modern gem. 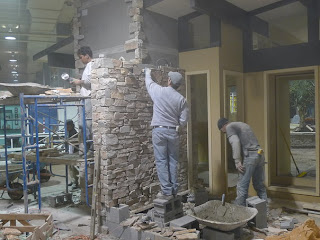 Ted will also be giving a presentation on the Home Ideas Stage titled "Seamless: The Mid-Century
Modern Home and it's Garden".  Scheduled for Weds. at 4:30 and Friday at 7:30pm.

Another fun blast to the past will be 3 two-room vignettes that an interior design class at the Art Institute of Charlotte has designed.  The three settings follow a fictitious family thru the 60's, 70's and 80's and will make you remember your childhood... or your parents childhood.

The Southern Spring Show starts March 3rd and runs through the 7th at The Park Expo, (previously the Merchandise Mart) at 2500 Independence Blvd.
Posted by Charlotte Modern at 8:59 PM

Charlotte Modern
Mad for Modern? So are we! Let us show you all the fun Mid-Century Modern and Contemporary homes Charlotte has to offer. We specialize in Modern Architecture and homes for sale. 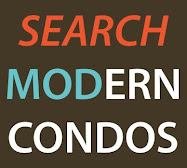 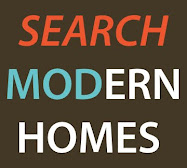 Find a place to stay in Charlotte